Whether you are an office worker who has developed neck pain or you have developed neck pain after a whiplash injury, chances are, your upper trapezius muscle is likely playing a role in your pain. Today, we are going to focus on the ins and outs of this muscle.

The Anatomy and Function

Although consistently referred to as a separate muscle, the upper trapezius is just one of 3 parts of the trapezius muscle, with the middle and lower trapezius being the other two parts. The upper trapezius has separate attachment sites and actions than the other two parts. The upper trapezius arises from the superior nuchal line and ligamentum nuchae, in other words, the muscle comes off the back of the skull and a ligament that runs down the center of the back of the neck. The upper trapezius then runs down to attach to the outer edges of the clavicle (ie collar bone). Because of the orientation of the fibers and the attachment site on the clavicle, these, fibers act more on pulling the clavicle posteriorly and medially, or in other words, back and in towards the body, versus up and towards the ears. This assists with movement of the shoulder and helps to distribute loads when lifting. The upper trapezius’s function changes slightly depending on the muscle it is working with. For example, it assists in moving the head when working with the sternocleidomastoid but helps with moving the shoulder blade when working with the levator scapulae or anterior scalenes muscles. This muscle is innervated by the spinal accessory nerve (motor) and by cervical nerves 3 and 4 (pain and proprioception).

The upper trapezius is often involved in those suffering from neck pain and headaches, whether the pain came on after and 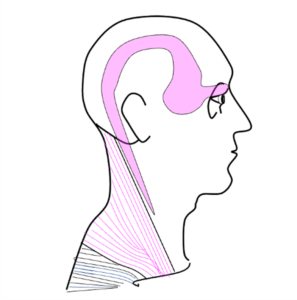 injury or gradually evolved over time without any clear triggering event. Trigger points in this muscle commonly refer up the side of the neck, the mastoid process, around the back of the ear, behind the eye, and into the temple region. It can also refer pain into the jaw.

That sage old advice that parents and grandparents love to dole out “sit up straight!” will help your upper trapezius muscle relax. Research has found that a forward head position (ie slouching with your chin jutted out) increases strain to this muscle. So, by simply sitting up straight, you can immediately reduce tension in the upper trapezius. For office workers, making sure the arm rests are supporting the arms and the height of the keyboard is at an appropriate level are important. For those who need more intervention to get their pain under control, specific exercises and trigger point release can be done by a physical therapist.

Keep an eye out for additional muscle spotlight posts to learn more about which muscles could be contributing to your neck pain and headaches!