I’m delighted to get to introduce myself, and one of the areas on which I focus my education, clinical, and research efforts! My name is Dr. Wexler and I’m a neuroendocrinologist. I spend much of my time thinking about and working on pituitary issues that can happen after brain injury.

Neuroendocrinology focuses on the hormones that are managed by the pituitary gland.  The pituitary oversees regulation of several hormones, including cortisol (“stress hormone”), thyroid hormone, sex hormones (testosterone or estrogen) and prolactin, and growth hormone.  Too much or too little of any of these is problematic and the pituitary and hypothalamus help maintain equilibrium.

Here’s an example:  If the thyroid gland, located at the base of the neck, can’t make enough thyroid hormone, the pituitary senses this, and increases the secretion of thyroid stimulating hormone, or TSH, to maintain the right level of thyroid hormone. 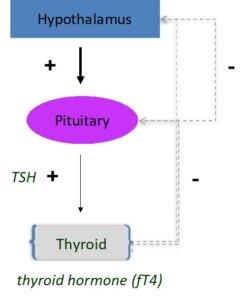 If the pituitary is not working correctly—if it is damaged and can’t make enough TSH to maintain thyroid hormone—the level of TSH will likely only hover in the normal range, not able to reach levels needed to keep thyroid hormone in the right range.

The risk of developing pituitary hormone deficiencies is increased after a traumatic brain injury (TBI).  This can happen after even mild concussions. Given that many people experience concussions, there has been a lot of research into how to predict who will develop pituitary deficiencies.  Who should be tested for pituitary hormone deficiencies?  The best signal appears to be persistent symptoms, well beyond three months after the injury. In the first few months after a TBI, hormones may reflect an injured state and generally should not be interpreted then, other than the cortisol system.

Symptoms might include persistent cognitive slowing or “brain fog,” unexplained changes in weight or appetite, menstrual cycle irregularity, sexual dysfunction (for example, loss of spontaneous morning erections in men), and changes in mood or energy.  There is a lot of overlap between symptoms that can be seen in pituitary deficiencies, and symptoms due to other aspects of a TBI, but careful hormone evaluation can determine if there is a pituitary deficiency. If a hormone deficiency exists, replacing that hormone should help or reverse whatever symptoms are due to the deficiency.  For example, if 50% of fatigue and a decline in attention and memory are due to a hormone deficiency, hormone replacement should help with that 50%.

While there is finally more attention being paid to many of the negative health effects of a concussion, there is still insufficient awareness of the role that pituitary hormone deficiencies may play in long-term symptoms. If you wonder if your symptoms may be in part due to pituitary issues, it’s appropriate to ask (and keep asking!)

For more information, check www.neuroendocrineassociates.com, or reach out via the Concussion Care Centre of Virginia, 804-270-5484 or info@cccv-ltd.com.