Humans have been focused on lighting since ~500,000 years ago when man invented fire.  Then in 700BC mankind made a giant leap forward when they were able to control fire with… drum roll please… candles.  It has only been recently since the invention of incandescent light bulbs in the 1800s and fluorescent light in the 1940s that humans have evolved to live with artificial lighting, and it has only been in the past decade that the villainization of “blue light” has come to the media forefront. 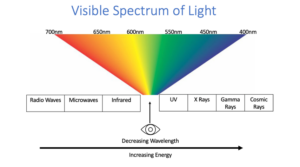 In its simplest description, light is an emission of energy by an object – and that energy can be defined by multiple properties including intensity, wavelength, and color.  Wavelength has an inverse relationship to energy, meaning the shorter the wavelength, the higher the energy.  Visible light, the light we can see, ranges from 700nm (red) to 400nm (blue).

The most dominant source of visible light is the sun.  Fire is a low intensity light, that emits a broad spectrum of light wavelengths (colors), known as an emission spectrum, similar to that of the sun.  Incandescent light is generated by an energized conductor, which generates light through heat.  Incandescent light sources have similar emission spectra to the sun with high-wavelengths and feels the most “natural” to us.  The downside?  Generating light through heat requires a LOT of energy consumption, making it economically impractical, which led to the invention of fluorescent light sources in the 1940s.  Fluorescent light sources have low-energy consumption and generate light through excitation of individual atoms, these include compact fluorescent lamps (CFLs) and light emitting diodes (LEDs), emitting lower-wavelength energy light in the blue spectrum. 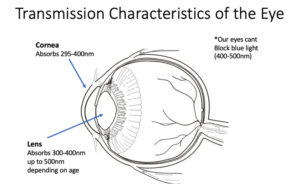 Light and the Eye

The most damaging light to the eye would be that with the highest energy and thus the shortest wavelength.  The eye itself is capable of absorbing some of this high energy light to protect the back part of our eye, called the retina.  The cornea and the lens are able to absorb 295-400nm light[i], which we know as UV light.  This is why eyecare practitioners recommend sunglasses with 100% UVA/UVB protection, because the front surfaces of our eye can absorb the UV light which overtime can lead to structural damage and in some cases cause cancer. Thus, the highest energy light that can penetrate the eye and potentially cause harm is light that ranges from 400-500nm, which we colloquially call, “blue light.”

While blue light, when concentrated and in high doses, can be phototoxic to the retina, blue light that is emitted from our devices must pass regulations on hazardous exposure limits as set out by numerous national and international organizations like the International Commission on Non-ionizing Radiation Protection (ICNIRP).[ii]  Studies have compared CFLs, LEDs, computer screens, tablets, laptops and smartphones to assess for worst case exposure conditions for someone staring at a screen for extended periods of time and concluded there was no cause for public health concern due to the minimal amount of light actually able to reach the retina.[iii]  This sentiment has been further supported by scientific literature and national organizations like the American Academy of Ophthalmology.[iv]

So Why the Hype about Blue Light?

While blue light from our electronics may not cause retinal damage, blue light can still impact your overall health, because blue light has a function.  Blue light, specifically 446-480nm light, activates a very specific intrinsically photosensitive retinal ganglion cell (ipRGC), a neuron in the retina that is key to influencing the pupillary light response, the light-pain matrix, and our circadian rhythm.[v] [vi]

Blue light comes from the sun, and evolutionarily, when blue light (the sun) is out, then the ipRGCs tell the hypothalamus that the sun is out, in which case the brain suppresses melatonin and makes us feel awake and alert.  When blue light (the sun) goes away, then the hypothalamus shifts into night mode, and starts to synthesize melatonin, and we start to get tired in about 2-3 hours when melatonin levels have risen to a significant level.[vii]

The problem with our blue-light emitting devices, is that they have a direct impact on our sleep-wake cycles.  When we use our electronics at night, we are signaling to the brain that it is daytime, and we suppress the brains ability to secrete melatonin.  Which is why when you put your phone away at 11pm while you are in bed, you may have a hard time “feeling tired” for up to a few hours.

Blue-light blocking lenses and coatings are an unregulated optical phenomenon that has exploded since the pandemic.  Studies have compared different blue-light blocking spectacles and found that on average, they only reduce melatonin suppression value (MSV) by 33%, and that was variability across different types of lenses and tints – coated lenses being more efficient than tinted lenses.  Turning the device onto “night-mode” function on the other hand reduced the MSV by up to 93%! With the warmest (most amber) mode producing the least amount of suppression.[viii]  So recommendations based on evidence-based research suggests the best practice for sleep-wake cycle regulation is to turn devices off/avoid devices 2-3 hours before bedtime, followed by turning the device onto night-mode when it is nighttime.  If you feel your blue-blocker lenses help you go to sleep you can continue to wear them without harm, but they are not as effective as the first two methods.

What about Blue Light and Brain Injury?

Many people with brain injury are light sensitive, and find fluorescent lights, LEDs, and UV light to be the most triggering – which would lead one to think that blue-blocking lenses would be beneficial to them during the day.  However, recent studies have shown that patients with mild traumatic brain injury (mTBI) who wore tinted lenses indoors had prolonged recovery of their photophobia.[ix]  Additionally, other studies have shown that exposure to blue light during the day, particularly the morning, can actually improve daytime sleepiness, sleep quality, recovery of brain structure, function, and cognition after mTBI.[x] [xi]  Therefore, blue-blocking lenses during the daytime may be contraindicated in patients with brain injury.

What does the “Doc” say?

Recovery of photophobia in TBI is the ultimate goal – while one may feel better with tints in the moment, the tints may exacerbate and prolong 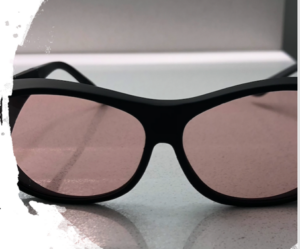 the photophobia ultimately, making treatment of photophobia with tinted lenses controversial and tricky.  This can be further complicated by patients who have both brain injury and migraine – the latter of which responds well to tinted lenses – a topic to be discussed in a future article.  Bottom line? It’s complicated. Consult a professional who has experience treating patients with photophobia, who can make precision tinted lens recommendations based on your individual concerns.

[iv] Vimont C. Should you be worried about blue light? American Academy of Ophthalmology: Tops and Prevention for Public and Patients. https://www.aao.org/eye-health/tips-prevention/should-you-be-worried-about-blue-light